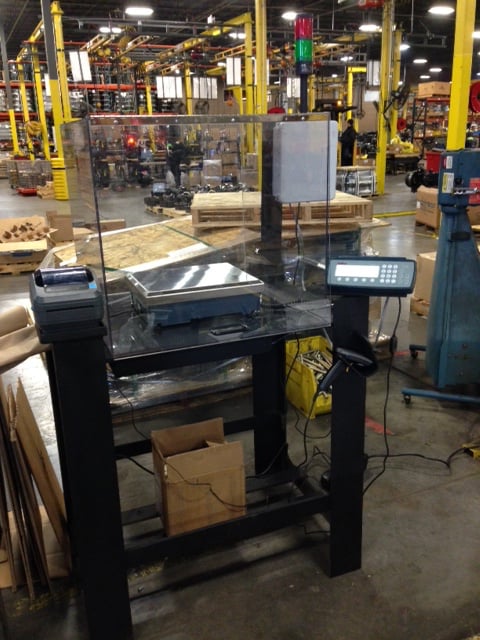 J.P. Bowlin provided a solution to the automotive parts manufacturer which included a Setra Super II 55 Lb capacity scale with check weighing function and light tree. J.P. Bowlin also provided a label printer and special programming to print a label when the box passed tolerances or waited until box was checked if out of tolerance. The operator would either check the box while on the scale or be forced to manually print a label which was marked “Out Of Tolerance”. He would then place the box out of the way from the ones being shipped for recheck later.

The system included one scan gun, printer and special programming. The programming solved the issue three ways.  First, put the product into memory with description and tolerances. Second, created a bar code for the product number with Setra control codes in it so it could be scanned instead of typed in by the operator.  The third program is where the boxes were checked. Once the part number bar code was scanned the controller would retrieve the data from memory and place it into working memory. The operator would also have to scan his Employee Number and then enter the number of boxes to be checked. Once all the boxes were checked, the controller would send the transactions to the host computer and it would populate a spread sheet.