Averitt Express is a freight and logistics company that needed a new dimensioning system to capture the dimensions of palletized freight at their Grand Prairie Service Center.  They already have scales on their forklifts which collect the weights of the freight as the pallets are moved inside the facility and sends that data wirelessly to their data collection system.  Since dimensional weight is now being used to more efficiently load trucks and more accurately bill customers, they needed a new Dimensioning system that could quickly capture the dimensions of the freight and send that data wirelessly to their data collection software.  After looking at their options they chose a Rice Lake iDimension 400 system.  J.P. Bowlin assisted in installing the iDimension 400 which was a quick and easy one day job for 2 people.  The iDimension 400 is suspended from the ceiling of the warehouse and interfaces wirelessly with their existing fork lift scales.  The forklift operators are sent a freight ticket and pick up their assigned pallet with their forklift.  They enter the product ID number into the forklift scale indicator and the weight is captured.  They then move the pallet to an area under the iDimension 400.  They set the pallet down under the dimensioning system and back their forklift out.  Once the forklift is outside of the marked dimensioning zone they press the enter key on the forklift scale indicator.  The weight data and the freight’s dimensions are instantly transmitted wirelessly to their data collection software.  Averitt Express already had an existing dimensioning system in another part of their Grand Prairie Service Center that a different supplier had provided them with.  After using the Rice Lake iDimension 400 for less than a week, they told us that they preferred the iDimension 400 because it was more accurate, had a wider viewing area, provided the freight dimensions much quicker than the competitor’s older model and best of all was nearly ½ the cost of the other brands’ bulkier system!  Please contact us to learn more or to discuss how we can interface floor scales with the Rice Lake iDimension systems as well. 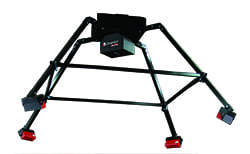 Rice Lake iDimension 400 Averitt Express is a freight and logistics company that needed a new dimensioning system to capture the dimensions of palletized ...